Can You Become Possessed as a Christian?

…or are you protected just by believing in Jesus?

The devil claps his puny claws and laughs at us Christians!

I am just a regular guy… I was a fairly lukewarm Christian, and it’s really not very long ago that I felt God was pretty far away, but who discovered one day, exactly three years ago, discovered that things actually happen when we pray. How I discovered that is another and somewhat longer story (you can read it here…) but what I experienced actually put me on fire for Jesus (not for the church, but for Jesus Christ). I started seeking God in a new way – and he sure answered me. More and more people came to my door because they wanted prayer – and after almost a year in the ministry, we also discovered how my wife, who was a Christian herself, was healed from Multiple Sclerosis, after which she also started to pray for people. Amazing….

Some of what really tricked me was that all that demon stuff only happens in Africa, but the Bible also commands us to cast out demons. It just didn’t quite make sense, because you would think that shamans and stuff like they have in Africa probably didn’t like in Israel, where Jesus also cast out several demons – but even so, Jesus cast out demons from people. Food for thought….

Well, but what I thought was really weird was my experience that slowly but surely, although I was praying for wonderful Christian, spiritual people who could speak in tongues, had surrendered to Jesus, had been baptized and the whole kit-n-kaboodle – and even though I was praying for something completely different than demons (things like anxiety, extreme anger or undefinable illness), I still experienced how they started to manifest. Some trembled very subtly, others vomited, some threw themselves to the ground in fury, etc.… So, in spite of theology and everything else, I experienced clear as day that although people were Christians, they could still have one or more demons, and I saw that when it was (or they were) cast out, people were delivered from their anxiety, anger, illness, allergy, etc.…

In the middle of my excitement about the goodness and power of God, I also soon discovered that as far as the church, I was labeled a bit of a nut and “way too much”… because, come on: ”Christians can’t have demons”! Christians can be influenced by demons from without, but they can’t have them inside.

It made me really frustrated and sad… because even when my wife was healed from sclerosis, there is no doubt that it was a deliverance, where she couldn’t even control her own body for 3 hours, and where a demon finally left her. We have experienced in our walk with God how you can communicate with demons during a deliverance. They can tell how they entered the person and confirm that they live in the person…. And I realize the lie the devil has used to dupe Christians and the “theology” of many churches: When you believe in Jesus, you can’t have a demon in you. But I also had to ask myself the following four questions:

Question 1
Was the devil actually afraid of Jesus? No… several places in the NT, the devil actually communicates with Jesus. Already when Jesus starts his ministry in the desert, the devil tries to tempt Jesus, right there in person ”face to face”. The devil knows that he must obey the authority of Jesus, but he was not afraid of Jesus. Nor was Satan scared of God – otherwise he would not have rebelled against God.

Question 2
So, obviously you are protected if you believe in Jesus/God, right? No…. Remember that not only does the devil believe in Jesus/God, but he KNOWS the truth of it. The devil was there during the writing about the entire Bible – he knows it better than you and I do! You don’t stay close to God by believing in him, but by believing, turning from sin, acting on the Bible, and BECOMING the person God created you to be according to the Bible.

Question 3
If a Christian has the Holy Spirit inside, does it mean that a demon can’t be in the person at the same time? No, it doesn’t…. We all consist of spirit, soul, and body. When we become ”born again”, it is our Spirit that is renewed, and the Holy Spirit enters our “new spirit”. Our soul is what gives us thoughts and feelings. And the body is kind of self-explanatory. It also means that our Spirit becomes “safe” when we surrender to Jesus…. BUT a demon can still move into your body and possess parts of it.
In the NT, we read of two examples of demonic “influence”. Peter is really close to Jesus and wants wholeheartedly to follow Him, but even so, Satan influences our good Peter (Matt. 16:22-23): But He turned and said to Peter, “Get behind Me, Satan! You are an offense to Me, for you are not mindful of the things of God, but the things of men.” No, Peter is NOT possessed here, but he is being influenced by Satan.

Another example: Judas who betrays Jesus obviously believes in Jesus and wants to follow him. Otherwise, he probably wouldn’t spend 3 years of his life on nothing. In Luke chapter 9 this very Judas was also sent out to preach the gospel, heal the sick, and cast out demons – He really didn’t mean Jesus any harm. But what happened…? Satan tempts him with money and recognition. Judas can’t resist the temptation, and he succumbs to Satan’s pressure… But do note that Judas does still believe in Jesus and is a committed Christian. However, in spite of this it says in John 13:27: ”Now after the piece of bread, Satan entered him. Then Jesus said to him, ‘What you do, do quickly.’…so Judas gives into temptation, and Satan (or a demon) enters him. Judas is still himself, but he is controlled by Satan. For this very reason, he later regrets his actions, because it wasn’t the outcome he had wanted. He had just been tempted by money and recognition.

So, if you sin as a Christian, you are simply opening yourself up to demons. Throughout the past three years, we have spoken with MANY Christians from all kinds of church backgrounds who have a hidden life of sin that nobody knows about. 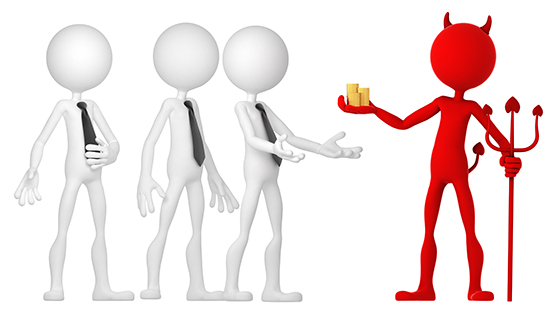 Do you believe it is possible to be a committed Christian while living in Biblical sin, such as bitterness toward others, drinking yourself into oblivion from time to time, frequenting prostitutes, having sex before marriage, being a homosexual, lying, stealing, being a tyrant with your spouse, staying angry, jealous, or selfish, practicing yoga or other alternative treatments, etc. while still thinking that you can be protected by your faith in God…??

At one point, Jesus heals a lame man… after which it says in John 5:14: “Afterward Jesus found him in the temple, and said to him, ‘See, you have been made well. Sin no more, lest a worse thing come upon you.’”… a worse thing coming upon you because of sinning – that doesn’t sound good…!

A completely different scenario might be that you, before you were a Christian, participated in a lot of sinful behavior or had been involved in New Age and let in a demon. It’s not going to disappear all by itself, just because you become a Christian, instead it has to be “kicked out”.

…Or what if there is a generational curse or other curses on you as a Christian, will they just be broken because you believe in Jesus? No, right?… They must be actively broken in the name of Jesus Christ. Many Christians just are not aware of this and live in bondage for far too many tears, because the side with “demons” is taboo or non-existent for Christians. Many close their eyes and believe that faith in God is enough.

Question 4
Can’t you protect yourself against getting a demon? Sure, you can…. It is quite simple, but not necessarily easy. Surrender wholeheartedly to Jesus – EVERY DAY…! Don’t live in sin or in your own desires, selfishness, anger, etc. – BE the person the Word says you are (you may want to read here: https://listen-to-jesus.com/how-to-read-bible/) – and DO what the word tells you to do. If you still fall into sin (after all, we are only human), then get forgiveness, settle it with the people you hurt, and immediately turn away from it, so you don’t fall in and commit the same sin again…. Because forgiveness is not a free pass to sin deliberately with constant, subsequent forgiveness. If, on the other hand, you don’t turn away from what the Bible describes as sin, and you actively choose to do it over and over and over, it is a free pass to perdition, regardless if you believe in God ever so much or do ever so much for Jesus.

I have experienced far too many Christians who are sick or otherwise influenced, who have received prayer from their congregations for a whole lot of years… but nothing happens. Why not…??? In some cases, it is due to the quite faulty theology about Christians not being able to have demons…. So, they ask God to remove the illness instead of commanding Satan to leave with all his destruction. Of course, this is not always the reason there is no healing, but unfortunately you see it far too often.

WAKE UP!!! Because when the devil really is sitting there, laughing and clapping his claws… when you won’t recognize that he can send a demon into a Christian (not just external demonic influence or influencing your thoughts), we have really lost the battle. How can we conquer land for the Kingdom of God, if we close our eyes to where the enemy is lurking???

If we start to rest in and understand who Christ has created us to be, do what He commands while putting on the “full army of God” (Eph. 6:11), the devil simply can’t gain a foothold in our lives. So, don’t fear Satan, but cling to Jesus!

Suggested reading on the topic: They will be exorcising demons from Derek Prince: https://nuggets4u.files.wordpress.com/2014/12/they-shall-expel-demons-derek-prince.pdf 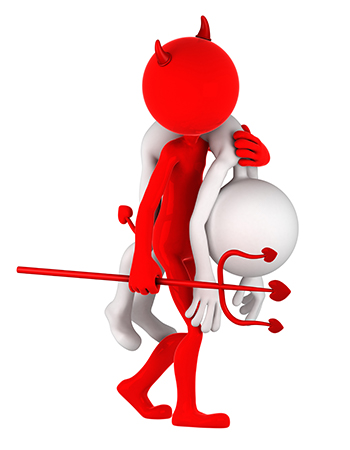 When we begin understanding who Christ created us to be and when we do what He commands us to do putting on the “full armour of God” (Eph. 6:11), then the devil is simply unable to get a foothold in our lives. So do not be afraid of Satan, but stay close to Jesus!

“How to resist the Devil” by Dan Mohler

All the Promises God Gives us – WOW!!

Is Your Daily Life Dull and Gray?
Scroll to top