Homosexual – against the law?

You are here: Home1 / Mixed information2 / Homosexual – against the law?

Danish Law about Legalizing Homosexual Marriage in the Church

– “the Christians” lost in court.

As many have probably heard, yesterday “the Christians” lost the case as to whether or not the new law to legalize homosexual marriage in the church was unconstitutional.

Because the judicial decision reads that “the competence to regulate state church matters belongs to the legislative powers and the government, which has considerable leeway as to which limits the Evangelical Lutheran tenets of faith places on such regulation.”

Let me first say this… I have NOTHING again homosexuals. They are often among the nicest and sweetest people – but that doesn’t mean that what they are doing is right in the eyes of God!

IF you really believe in God and want to obey him, you obviously want a wedding with God’s blessing! But if you are not considering the words of the Bible as true anyway, then why in the world get God’s blessing mixed in with something He condemns in His word? It makes no sense whatsoever.

AND if the decision by the supreme court yesterday means that the STATE is setting the agenda for what God must bless (even though it directly contradicts His word), then it’s truly a low point for the church!

What is the state church today after that announcement? A cultural institution with the mere purpose of giving largest possible number of individuals “inner peace”, regardless of the means? Or what is the purpose exactly? Is it just “tradition”? Or what is point exactly, if God is made subservient to government?
– I DO realize  that a few pastors in the state church are truly MAKING A DIFFERENCE (and may God bless you), but right now I am looking at it as the general “institution”.

What happens if we change God’s word…? Because hearing and believing is not enough, we have to obey as well:

John 3:36 (TLB): And all who trust him – God’s Son (Jesus) – to save them have eternal life; those who don’t believe and obey him shall never see heaven, but the wrath of God remains upon them.

…faith is not enough!!! We have to obey the words of Jesus.

The whole thing about the decision of the court and about the Christian “legalization”, “justification”, and “bite-our-tongue culture” reminds me more than anything of a vision I had this summer:

Here, you can read an article about what the Bible says about homosexuality.

I LOVE MY COUNTRY! I truly love Denmark!!! But I am truly disappointed that as of yesterday the state has placed itself above God. That sort  of “choice” will not exactly  rain down blessings on the country, but rather it will have fatal consequences…..

Here are a few of the things the Bible says about homosexuality.

Rom. 1:22-28: Professing to be wise, they became fools, and changed the glory of the incorruptible God into an image made like corruptible man—and birds and four-footed animals and creeping things.

Therefore God also gave them up to uncleanness, in the lusts of their hearts, to dishonor their bodies among themselves, who exchanged the truth of God for the lie, and worshiped and served the creature rather than the Creator, who is blessed forever. Amen.

For this reason God gave them up to vile passions. For even their women exchanged the natural use for what is against nature. Likewise also the men, leaving the natural use of the woman, burned in their lust for one another, men with men committing what is shameful, and receiving in themselves the penalty of their error which was due.
And even as they did not like to retain God in their knowledge, God gave them over to a debased mind, to do those things which are not fitting

Tim. 1:10:
…for fornicators, for sodomites, for kidnappers, for liars, for perjurers, and if there is any other thing that is contrary to sound doctrine….

Not directly about homosexuality, but about the consequences of not obeying:

Jude 1:7:
… as Sodom and Gomorrah, and the cities around them in a similar manner to these, having given themselves over to sexual immorality and gone after strange flesh, are set forth as an example, suffering the vengeance of eternal fire. 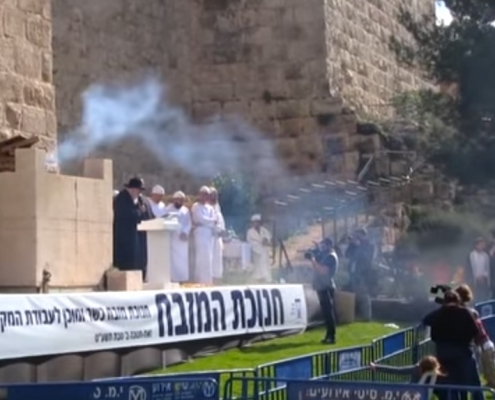 Easter – another ridiculous Holiday? Or freedom ..?
Scroll to top